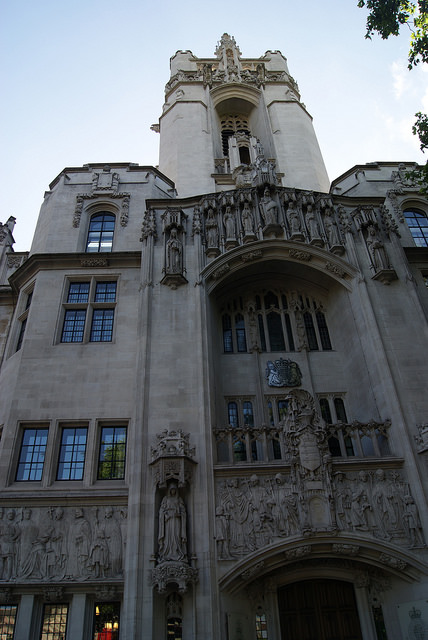 At the Scottish Law society Conference last week, Lord Hodge, one of two Scottish Supreme Court justices, gave a fascinating talk on the inner workings of the Supreme Court. Many litigation solicitors will spend their entire working lives without any of their case-load reaching the Supreme Court; until a couple of years ago I assumed I would be one of the many. However, in 2013, MBM was asked to take a banking case with which we had been involved since 2008 to the Supreme Court. Our client, Derek Carlyle, had been successful at first instance, but had just lost in the Scottish Appeal Court. We agreed to take his case to the Supreme Court on a contingent basis, so were both pleased and relieved to receive an emphatic 5-nil victory in March of this year.

Interestingly, at the Law Society Conference, Lord Hodge revealed that he is often asked by his fellow judges what the Scots law answer to a particular problem may be: even in English cases, he said, the court takes a real interest in Scots Law solutions.

What was the Carlyle case all about?

As a starting point it is useful to go back to the case at first instance, in 2009, and look at what was being argued – and before whom. A quick re-cap: Carlyle had asked RBS for funding to buy a plot at Gleneages; because of a buy-back clause he had to develop the plot to wind and water tight stage by 2011 or he would be compelled to sell the plot back for the price paid – so he stood to lose a lot of money if he did not complete development on the site. Given this crucial detail, he approached RBS, and said that it was essential, if lending him the money to buy the land, that the bank also lent him the money to develop it. RBS confirmed that they understood this during telephone discussions and verbally advised him that funding was “all agreed”. On this basis he bought the plot with funds advanced by RBS. However, no development funding was ever provided by RBS, who subsequently raised proceedings against Carlyle in 2008 seeking recovery of the sums loaned by them for the land acquisition.

The hearing at first instance – the English concept of collateral warranty

The commercial judge who had been assigned the case, Lord Glennie, was formerly an English QC who had moved up to Scotland to practice before being appointed to the Scottish bench. And the principal argument which was being advanced before Lord Glennie was this: the promise by RBS to provide development funding was a “collateral warranty”, that is, a promise made as collateral to a principal contract which induced the recipient, Mr Carlyle, to enter into the principal contract (the loan of money for land acquisition). As an former English barrister, Lord Glennie had no difficulty with the importation of what was essentially very much an English Law concept into Scots Law. He found that the promise was indeed a collateral warranty which on the evidence had been breached. (it is worth noting that there was no Entire Agreement clause in the contract for loan funding. If there had been, such an Entire Agreement clause would have defeated any collateral warranty argument).

The procedural background to the Supreme Court hearing

RBS appealed, and in due course the case reached the Scottish Appeal Court (known as the Inner House). It is fair to say that the Inner House were less than thrilled with an English law concept being adopted as part of Scots Law. They emphatically rejected the idea, finding resoundingly in favour of RBS. They held that (i) far from promising development funding, the bank had simply informed Carlyle of an internal decision to approve funding in principle; (ii) the bank was not under any legal obligation until there was a written loan agreement (and they were wholly dismissive of the idea that a bank could intend to bind itself verbally); and (iii) the promise was legally ineffective because essential terms, including for example, the interest rate on the development funding, had not been agreed.

The Supreme Court found in favour of Mr Carlyle. Interestingly, the judgement was written and delivered by none other than Lord Hodge, the speaker at the Law Society Conference! He found first of all that the Inner House’s characterisation of the “promise” as merely a “decision in principle” was straying beyond their appellate function. Essentially what the Inner House had done was to interfere with Lord Glennie’s factual findings without facing up to the fact that they had done so, and without facing up to the restricted role of the appellate function.

Secondly, the Supreme Court held that it was perfectly conceivable that the bank had in fact intended to bind themselves when they made the promise and indicated that “it’s all agreed”. Lord Hodge pointed out that “it is notorious that the prudence which historically has been attributed to Scottish bankers was not always in evidence in commercial and mortgage lending in the years leading up to financial crisis in 2008”.

Thirdly, the Supreme Court held that the promise was legally effective – but here’s where the issue was fudged: they decided that

The pleading of a “collateral warranty” became a distraction in this case. It was not used as a term of art. Either “promise” or “unilateral undertaking” would have been a suitable choice of words for the independent legal obligation which Mr Carlyle was asserting.”

They went on to consider the differences between Scots Law and English law in this context: in English Law, they pointed out, “the doctrine of consideration requires the recipient of the representation or promise to give consideration by entering into the envisaged other contract in order to make the representation or promise a binding contractual obligation. This appears to be behind the approach of the English courts to collateral contracts as in Dick Bentley Productions Limited v Harold Smith (Motors) Limited [1965] 1 WLR 623, Lord Denning MR at p 627; J Evans & Son (Portsmouth) Limited v Andrea Merzario Limited [1976] 1 WLR 1078, Lord Denning MR at p 1081F.”

Conversely, in Scots Law, a unilateral undertaking that intended to have legal effect, such as a promise, is binding without consideration. The promise can be collateral to another contract – but does not have to be. The issue is simply whether a legally binding obligation has been undertaken.

In Carlyle, we argued that the promise to provide development funding was an obligation in a bilateral contract which became binding when Mr Carlyle borrowed the purchase funds and purchased the site. Effectively the Supreme Court held that they could find in Mr Carlyle’s favour without having to decide this level of fine detail. If the promise was one which the bank had intended at the time to be binding, then under Scots law, there was no need to consider consideration – in Scots law the promise could be binding without it. But this is not the same thing as saying there was no consideration. The Supreme Court declined to express a view on this. Instead they said in conclusion:

“The statement that the bank would provide the development funding induced him both to contract to purchase the plot and enter into the loan agreements which funded that purchase. It is legitimate to describe the promise to provide development funding as collateral to the other agreements. But, as I have said, that does not affect the legal analysis in Scots law.”

What does this really mean for English claimants and English lawyers?

What this really means is that the analysis of the situation as a collateral warranty worked perfectly well from the Supreme Court’s perspective. It was possible to view the promise as collateral to the loan agreement for land acquisition – simply not necessary or essential to characterise it in this way. As “promise” was a more straightforward and more readily understood concept in Scots law, it was simpler to characterise “it’s all agreed” in this way – but it clear from Lord Hodge’s comments at paragraph 36, towards the end of the judgement, that the “promise” could equally well be described as “collateral to the other agreements” – and thus, the concept of collateral warranty remains.

English claimants should therefore take a great deal of comfort from the Carlyle decision. Firstly, it is one of the first occasions on which judges have affirmed the commercial reality known to all those working in the property sector in the years leading up to the crash: deals were done on a handshake, paperwork was scant, and it was common for promises that were intended to be honoured to be made verbally.

Since the recession first hit, it has, of course, been an uphill battle for property developers and SMEs to pursue legitimate claims against their bank: they have faced the double hurdle of the inequity in funding, together with the fact that the courts

appear to have taken a very conservative, and indeed at times somewhat unrealistic approach to claims against banks, seeming not to understand the reality of the way in which lending was undertaken before 2008.

In Carlyle we see a rare judicial acknowledgement of the reality which was the relaxed approach the industry enjoyed pre-recession. The Scottish Appeal Court, the Inner House, had suggested that the evidence did not demonstrate a concluded agreement capable of enforcement, not least because the agreement or promise was not in writing and they considered it highly improbable that a bank would commit itself to lend without setting out terms and conditions in writing. However, the Supreme Court thought otherwise.

Secondly, it is reasonably clear from what was said by Lord Hodge that the Supreme Court were certainly not rejecting a collateral warranty label being applied to the facts. They expressly said that “It is legitimate to describe the promise to provide development funding as collateral to the other agreements”. Now, if you had found yourself in a similar situation to Derek Carlyle, with the firm promise of development funding being withdrawn after you had purchased land, you might want to look carefully at the terms of the “other agreement”, namely the loan agreement for the land acquisition – because if there is a clause in that agreement headed “Entire Agreement” which provides that the loan agreement will constitute the entire agreement between the parties, then it will not be possible to run a collateral warranty argument. However, if, like Mr Carlyle, there was no such clause in your later loan documentation, then you should be able to run the collateral warranty argument on the strength of Carlyle in the Supreme Court.