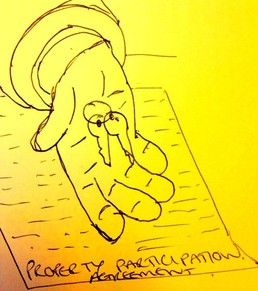 The global economic crisis had many victims but particularly hard hit were companies and partnerships with large property portfolios. In late 2008, the property market slumped and land values dropped significantly.

The banks subsequently instructed surveyors to revalue properties and land of their borrowers. In many cases, the drop in value of the land pushed up the loan to value (LTV) ratio above the loan agreement covenants resulting in a breach of the agreement.

THE KISS OF DEATH

Once borrowers were in breach of their LTV loan covenants then the banks invariably took the view they were now in financial distress and should be moved from commercial lending to the banks’ restructuring group.

Unfortunately this is often the banks' ‘kiss of death’ for the business. The banks would thereafter usually demand that consultants be appointed to assess the financial viability of the company who would then submit reports to the banks.

THE LAW OF THE JUNGLE?

It was generally around about this time in the process that the banks would exert their stronger bargaining power on the borrower and make clear in no uncertain terms that they were not going to continue to support the business unless a ‘property participation agreement’ was entered into. The business was usually only given a very short time period to confirm whether they wished to enter into the agreement under the threat of their company being put into administration/liquidation or partnership being sequestrated.

The property participation agreement (“PPA”) does state that the effect of the PPA has been explained by an independent adviser (such as the business’ solicitor, accountant) so the banks will no doubt argue that the business entered into the PPA with their ‘eyes open’ but in what circumstances? They face the plug being pulled on the business or sign up to the PPA? Do they really have a choice? Is this just ‘commercial rough and tumble’ or is this illegal pressure that renders the agreement void? What legal remedies can assist a borrower?

IS THE PPA ILLEGAL?

It is not uncommon for parties to enter into bad bargains especially where there is unequal bargaining power and one party is very much at the mercy of the other. However does this unfairness mean the contract should be held to be unenforceable and invalid?

Scots law has some early legal authority that unfair and oppressive contracts are invalid but the more recent cases uphold a general principle that unfair contracts must stand.

It is not for a judge to decide whether a business has made a good or a bad bargain. If this were the case, then as Scottish legal commentators have previously asserted, a flood of claims would occur if contracts could be held invalid on the ground of fairness alone.

Unfortunately the general terms of the PPA are unlikely to be unlawful. If that were the case, then countless onerous business contracts would be at risk of being held to be invalid and unenforceable. Moreover the banks would be putting themselves at risk of mass litigation. However as any lawyer will tell you, every case turns on its facts. It may be that in the circumstances of a particular case, the actions by the bank prior to the borrower signing the PPA render it invalid.

1.DUTY OF CARE TO ADVISE

It should be emphasised at the outset that there is no duty on the bank to consider the prudence of entering into the PPA from a borrower’s point of view or to ‘take care of the borrower’. However if the borrower makes clear to the bank that its advice is requested and the bank gives advice to the borrower then the bank may have unwittingly (in the absence of a suitable disclaimer) assumed a duty of care to advise the borrower about financial implications of the PPA with reasonable care and skill.

It will assist the borrower’s legal position if they are relatively ‘unsophisticated’, in other words, financially inexperienced and naive. However if the borrower has other advisers such as a solicitor or accountant this tends to suggest that the borrower is not relying upon the bank’s advice relating to the PPA and weakens their legal position.

The bank’s relationship manager must have taken on an advisory role. For example, the relationship manager’s advice may have been: “In our view, the PPA is a key component in the debt reduction strategy...which does not prejudice the company’s position”.

It is often difficult to distinguish between advice and providing information to the borrower so professional legal advice should be sought at an early stage.

If a duty of care can be established and that it was breached then damages may be pursued to put the borrower in the position they would have been in had they not entered into the PPA if it can be shown the loss suffered was caused by the bank’s negligence.

If the borrower has been induced to enter into the PPA as a result of a misleading false statement by the bank then the borrower may be able to seek damages for losses suffered.

In short, the borrower must prove to the Court that but for the bank’s false statement, they would not have signed the PPA.

The bank is clearly acting out of self-interest when it pressures the borrower to enter into a PPA because its purpose is to make profits from lending money to borrowers and providing other financial services.

However if the bank has expressly or impliedly agreed to put the borrower’s interests first in relation to the PPA then a fiduciary relationship may arise and by making an undisclosed profit will then have a conflict of interests and breach the fiduciary duty entitling the borrower to seek damages for their losses.

4.DUTY TO ACT IN GOOD FAITH

A broad principle of good faith and fair dealing was recognised in the Scottish case of Smith v Bank of Scotland over a decade ago and there is authority (albeit old) for general contractual obligations of good faith.

Good faith has been restricted to personal guarantee cases in Scotland but following the English case of Yam Seng PTE Ltd v International Trade Corp Ltd it is anticipated that the scope of the duty will be extended to all relational contracts (those involving long-term commitment, mutual trust and loyalty). It is hoped that a progressive Scottish judge would follow the approach taken in Yam Seng to imply a duty to act in good faith.

An argument may be advanced by the borrower that there is an implied term in the PPA to act in good faith towards the borrower by not placing the borrower under undue pressure to accept the PPA (giving insufficient time to speak to advisers or discuss refinancing with other lenders) and fully disclosing the financial implications of the PPA on the business.

If the bank put extreme pressure on the borrower to sign the PPA then a judge may decide that by the bank’s actions, the borrower did not consent (despite signing the PPA) and the PPA is void and cannot be enforced against the borrower.

The bank’s ‘victim’ should be careful not to do anything following the  illegal economic pressure that could be construed as validating or accepting the onerous terms of the PPA. It is essential that the pressured business takes reasonable steps to renounce the contract or ‘protest’ as soon as possible after the contract has been agreed to prevent the bank arguing that the terms of the PPA have been affirmed/accepted.

Have you entered into a PPA? Is your bank currently requesting you enter into a PPA? Do you want further information on PPAs?

If so, please contact one of our solicitors in the Financial Disputes Team on 0131 226 8200. We are happy to briefly discuss your situation and arrange a ‘no obligation’ meeting if our view is that MBM Commercial LLP may be able to assist you.