An Education in Mediation

An Education in Mediation 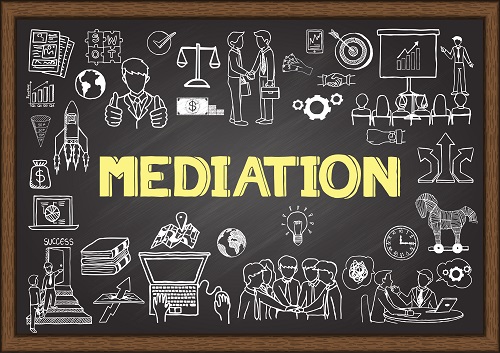 Last week, Hannah and I attended a very enjoyable and informative workshop on Mediation for HR Managers, hosted by Pamela Lyall. Pamela is an accredited mediator and has mediated in over 200 disputes, including many in the workplace.

Mediation can sometimes be overlooked as a means of resolving differences between employees. Pamela’s workshop sought to demonstrate how flexible, powerful and effective the process can be. Following the workshop, we thought it would be helpful to share some of Pamela’s advice on the benefits of mediation and how the process works in practice to allow you to make informed choices on the most effective means of resolution for your business when faced with workplace disputes.

Mediation is a means of assisted negotiation, whereby an independent ‘facilitator’ or ‘mediator’ will act as a neutral and non-judgmental go-between in negotiations, helping parties communicate and reach a positive and forward thinking solution. The process itself is voluntary and much less intimidating and forced than a court or tribunal set up. The outcome of mediation is non-binding but parties may, if they wish, agree to record terms in writing and make their agreement contractual. It is also an entirely confidential process and where settlement cannot be reached, parties cannot discuss the mediation process in any subsequent court or tribunal proceedings, other than to refer to the fact that mediation took place.

The use of mediation is widespread and is often used to solve commercial and family disputes as well as employment matters. Under the heading of ‘Employment’, Pamela recognises two types of mediation:

Disputes may arise for a variety of reasons and mediation can concern allegations of bullying, harassment or discrimination, personality clashes and breakdowns of trust, disciplinary or grievance issues, issues with management, employee performance or dismissals.

What Happens at a Mediation?

During the workshop, Pamela explained the various steps involved in a mediation process and worked through a series of role play examples with those attending, to put these into an everyday context.

As mentioned above, the outcome will be non-binding unless agreed otherwise. Even where no agreement is reached, mediation will often result in the dispute being resolved shortly afterwards, with parties having gained a better understanding of their conflict having engaged in meaningful discussion.

Some of the benefits have already been highlighted above but one of the major advantages of mediation is its proven success. A success rate of around 80% is generally acknowledged by most mediation providers. And matters can be resolved quickly too, as there is no need to go through the expensive, slow and formal court process. Mediation gives parties the chance to resolve conflicts, in many cases without the need for someone to depart the business, which normally costs more than a settlement offering and the cost of recruiting to replace the wasted talent. There are obviously costs involved if an independent mediator is appointed, however, these will normally be agreed up front and will be significantly less than the litigation process. For employers, mediation can also effectively avoid the damaging reputational risks involved in defending tribunal and court claims.

Mediation is certainly something that we would consider as an effective means of dispute resolution in the workplace and we would be interested to hear if you have experience of how this has worked in practice in your organisation. For further information, or if you are interested arranging a workplace mediation in your business or attending one of Pamela’s workshops, please get in touch with Hannah or Hayley  here at MBM or with Pamela direct at pamela@pamelalyall.com or on 07778 384150.

Tweet
Historic Protections for Modern Tenants
What is the latest on swap litigation? Fraud and d...