Clash of Laws: That'll Be The Clear As Mud Arbitration Clause!

Clash of Laws: That'll Be The Clear As Mud Arbitration Clause! 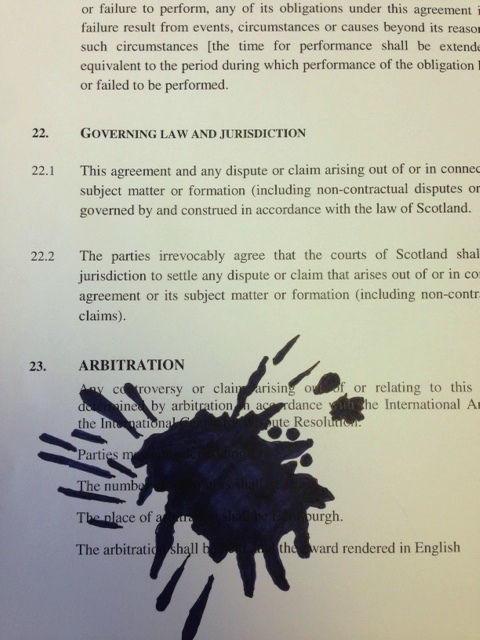 For those unfamiliar with arbitration it can often come as a surprise to find out that an arbitration clause in a contract is considered to be separate from the main contract and survives the termination of the main contract. This is known as the doctrine of separability and is widely recognised in many countries around the world but the application of it does vary from country to country.

What happens if nothing is said about the law governing the arbitration clause? The Court will have to decide whether it is the law of the seat or the law of the main contract. The recent case of Shagang South Asia (Hong Kong) Trading Co Ltd v Daewoo Logistics [2015] EWHC 194 (Comm) decided in the English Commercial Court is a good illustration of how the Court decides this question and also highlights the difficulties that can arise if an arbitration clause has been drafted too vaguely.

The background to the Shagang case is that Daewoo had agreed with Shagang to charter a ship. The agreement between the two parties stated that:

“[23] ARBITRATION TO BE HELD IN HONGKONG [sic]. ENGLISH LAW TO BE APPLIED. [24] OTHER TERMS/CONDITIONS AND CHARTER PARTY DETAILS BASE ON GENCON 1994 CHARTER PARTY [25] THIS CHARTERPARTY TO APPLY ENGLISH VERSION”.

The Gencon 1994 Charter Party (“GenCon 94”) referred to in the parties’ agreement stated:

In February 2014, arbitration proceedings were commenced by Daewoo against Shagang relating to a cargo dispute. There was no response from Shagang so Daewoo appointed Mr Rayment as sole arbitrator and he gave notice to parties of his appointment in March 2014.

The Arbitrator took the view that the arbitration procedural law was English and the standard clause in the Gencon 94 applied. In July 2014, he proceeded to issue his Award. Shagang applied to the Court under section 67 of the English Arbitration Act 1996 to have the Award set aside and for a declaration that the Tribunal was not properly constituted.

Shagang argued that since clause 23 of the parties’ agreement provided for arbitration in Hong Kong then the procedural law relating to appointment of arbitrator etc was Hong Kong ‘s HK Ordinance. They sought support for that argument on the basis that Clause 19 of GenCon 94 is not consistent with clause 23 so the Arbitrator had no jurisdiction.

Daewoo argued that clause 23 and clause 19 when read together provide for Hong Kong to be the geographical location for the arbitration but that the arbitration is subject to English law and English arbitration procedural law so the Arbitrator had jurisdiction and the Award was allowed.

The Court decided that Shagang’s argument was correct and that there needs to be clear wording or some other contrary indication to displace the assumption that “to be held in Hong Kong” carries with it an implied choice that Hong Kong is the seat of arbitration and the procedural rules of HK Ordinance apply.

The Court took the view that the reference to “English law to be applied” was not clear wording or a contrary indication to displace the assumption that Hong Kong rules applied. It was more likely to mean that English law applied to the main contract rather than the arbitration clause.

The Court also agreed with Shagang that clause 23 did not fit with clause 19 of the GenCon 94 which suggested the parties wanted to do something different.