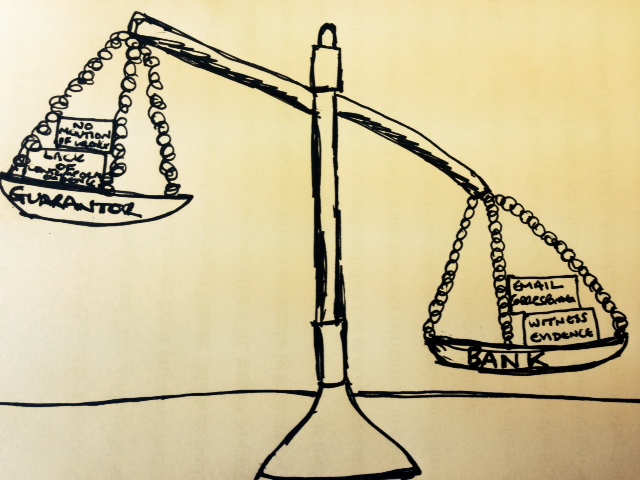 A recent judgement from the Outer House of the Court of Session in Sutherland v Bank of Scotland plc [2014] CSOH 113 is a timely reminder of the difficulties facing guarantors who seek to have their personal guarantee set aside on the basis of an alleged agreement or misrepresentation by their Bank.

Mr Sutherland entered into a personal guarantee (“PG”) in favour of the Bank for the debts of a company called Caithness Beef & Lamb (“the company”). In June 2010, Mr Sutherland alleged that he had been given assurances by the Bank's Mr MacDonald at the time of entering the PG that the bank would provide overdraft facilities up to £2 million.

In April 2012, the company entered administration and the Bank subsequently called in Mr Sutherland’s PG in October 2012. Mr Sutherland sought an order of reduction from the Court to set aside the PG (and charge for payment) with an alternative order for damages of £964,220.63.

Mr Sutherland advanced three alternative arguments to support the orders sought by him. These were as follows:

Mr Sutherland’s legal arguments failed to overcome the evidential hurdle of proving that the Bank’s employee, Mr MacDonald, had agreed with him to make overdraft facilities available in return for signing up to a PG. The judge, Lord Tyre, found Mr MacDonald to be a credible and reliable witness so that any evidence to the contrary from Mr Sutherland was rejected. He also considered the lack of reliable contemporaneous documentation to support Mr Sutherland’s version of events.

Mr Sutherland argued that his business plan submitted with a grant application and an entry in his desk diary supported his version of events. The judge found the content of the business plan did not support Mr Sutherland’s version of events that there was a promise or agreement to provide overdraft facilities up to £2 million. Furthermore, the judge held that the note in the desk diary was not made during the meeting between Mr Sutherland and Mr MacDonald on 18 May 2006 as alleged.

In summary the judge found the following factors to indicate that there was no agreement, no misrepresentation and no assurance given to Mr Sutherland by the Bank’s Mr MacDonald:

The first legal argument was that the Bank’s breach of contract (by not providing the agreed overdraft up to £2 million) meant that they could not enforce the PG due to the principle of mutuality of contract. However the judge’s view was that there was no agreement and referred to the alleged agreement being weaker than the insufficient alleged agreement in the recent case of Royal Bank of Scotland plc v Carlyle 2013 CSIH 75.

The second legal argument that the Bank’s Mr MacDonald induced him to sign the PG by the assurance of an overdraft facility up to £2 million floundered because the judge found that no such assurance was given by Mr MacDonald.

The third legal argument was that the Bank’s Mr MacDonald negligently informed Mr Sutherland that an overdraft of £2 million would be available to him and that he knew or ought to know that he would rely on the statement when deciding whether to enter into the PG. The judge appeared to be of the view the legal argument was a sound one but since he had found that no assurance was made then there was no breach of duty and the Bank was not vicariously liable for damages of £964,222.63.

There are several lessons that guarantors can learn from the bank’s victory. At an early stage before embarking on litigation, the credibility and reliability of the bank’s witness should be assessed by the guarantor’s solicitors if possible (by precognition) since this will be a critical factor to determine which version of events will prevail.

Moreover if there is no supporting documentation from around the time the alleged assurance was given then that is going to significantly weaken the guarantor’s case. In addition, if a significant period of time elapses from the alleged wrongful act and no mention of it in correspondence with the bank then this will be a further factor which will weaken the guarantor’s case.