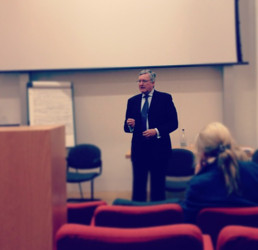 Monday 5th November marked the first event at the Edinburgh Centre for Carbon Innovationwhich attempted to dismantle the monumental topic of “Shaping Our Energy Future” - an attempt to create, as Susan Deacon put it, “a space for disagreements to be heard”.

Top names with a marked interest in Scottish and UK energy policy gathered, and it was obvious from the outset that there were plenty of opinions to be shared. The apprehension made for a tense atmosphere from the outset, with the intentions of the parties involved being subject to scrutiny on all sides. The stage was very deliberately set for a fiery and fascinating debate about a sensitive and extremely important issue.

After a slow start whilst the general rules of engagement were laid out among the combatants, the debate did not fail to deliver. It was obvious from the discussions, that despite the differences in opinion, three points could be agreed upon:

This may not seem like a great deal of progress, but finding any common ground between parties who are diametrically opposed on many issues was at least a step in the right direction. There were several points that were continually made throughout the day which rose to the top of a large pile of concerns. These included the need for a clearer energy policy, a need to get the public more involved, and a review into the value of community benefit and incentives for those affected by the proposed new energy projects. Successful schemes in Denmark and Germany provided the evidence for the latter – Denmark in particular allows for 80% of its wind farms to be community-owned which has in turn, resulted in a record support for wind energy in that country.

As with all healthy debates however, there were several fiercely dissenting voices to be heard. Graham Lang of the Communities Against Turbines organisation was particularly vocal and keen to put across his support for the continued use of nuclear power as a viable source of energy for the future. In my view, his position was perhaps slightly misinterpreted. The transmission from carbon-based energy sources to renewable energy sources requires security of energy supply (the first key point listed above) and nuclear power certainly sits in an excellent position for fulfilling this role. On the other hand, to suggest that nuclear power should be higher on the energy policy agenda than renewables is simply, I believe, outdated and completely unhelpful to the modern debate.

The event culminated in the appearance of theMinister for Energy, Enterprise and Tourism, Fergus Ewing MSP to answer any questions. From MBM's point of view, it is essential that, above all else, the energy policy is crystal-clear. For our clients, investors must have the security of knowing that green energy and sustainable business represent a secure investment and are government-backed, otherwise cash will ebb and flow dependent upon Holyrood/Downing Street’s next ministerial misstep, eroding the already fine line between success and failure for the green startup community.

It was encouraging to hear the Minister claim that Scotland is still “seen as good place to invest in Green Energy” and that the Scottish Government is continuing “to bring investors to Scotland”. I sincerely hope this is the case, as this is the only way to ensure a secure transition to a low carbon economy.

However, it was Dr Sam Gardner of WWF Scotland who was quick to remind the audience that the Scottish Government had failed to meet this year’s “legally binding” Climate Change targets – and this was perhaps the most sobering point of all. Not only is the UK behind in these targets, we are still nowhere near agreement on what is the best way forward, chopping and changing between renewable energies and still pandering to wilfully-blind climate sceptics, with the result that real progress continues to falter.

What is encouraging however is that a constructive debate has begun in Edinburgh and it is a debate which will hopefully lead to more much needed discussions on the many complex sub-issues involved in our energy future. I therefore applaud Andy Kerr and the rest of the ECCI for taking what are the vital first steps towards establishing a viable panel who want to see an effective transmission from a high-carbon to low-carbon energy system in Scotland and the UK as a whole.