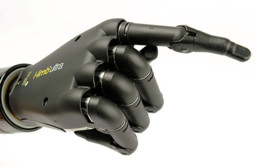 I was lucky enough to attend a truly inspiring talk tonight from Ian Stevens of Touch Bionics at the Royal Society of Edinburgh. Ian has been involved with the development of  three  major healthcare technologies over the last 14 years;  the Optomap retinal scan from Optos, Smartmesh for pelvic floor restoration fromMpathy Medical, and most recently the I-limb multi-articulating prosthetic hand from Touch Bionics. Ian’s success story is one of not only taking innovative IP, combined with an unmet market need, but also working with brilliant inventors and having support from Edinburgh-based business angel syndicate Archangel Informal Investments.

Douglas Anderson, the founder of Optos in 1992, was inspired to create the Optomap after his young son went blind in one eye from an undetected retinal detachment. Ian Stevens joined Optos in 1998 as financial director and helped set about commercialising a patient-friendly retinal image product that encompassed a digital wide field image of the retina in a single capture. Optos was Archangel’s first investment (following an introduction from Sandy) and the company was floated on the London Stock Exchange in 2006  valued at £165 million. Over 4,400 Optos devices have now been installed worldwide, with the main market in the US. The company’s unique IP made it such a success story, but to quote Nelson Gray, one of the angel investors involved in the company,  “Optomap has been at least a life changer – and often a life saver”. Optos was a slow burn to success but the Archangels philanthropic approach, providing support and investment (highlighted in Barry Sealey’s recent talk) allows Scottish life science companies to make a global impact.

Next up for Ian in 2007 was becoming chief executive of Mpathy Medical, another Archangel backed company. Indeed Archangel made Ian’s introduction to Mpathy.

The company was founded by entrepreneurial surgeon, Dr James Browning who wanted to create a better mesh for treating pelvic prolapse in women. He created a very fine polypropylene mesh through which new, healthy tissue could grow by way of allowing infiltration of macrophages and neutrophils. Once again the US was the biggest market for the device and it was clear that Mpathy had to have its own team in place there rather than relying on the relatively small UK market.

Mpathy were sued for patent infringement byColoplast but interestingly, Ian’s view was that this was a strategic move by the Danish company as their way of trying to put off opposition. Coloplast later bought Mpathy for £22 million in 2010. The court case actually resulted in the value of Mpathy increasing, reinforcing that young companies should have defendable IP.

In 2003, Touch Bionics became the first company to spin out of the NHS in Scotland. David Gow is behind the “i-limb” in the photograph above, the world’s first commercially-available bionic hand. Ian joined the company in May 2011, again through Archangel, and that year secured £2.5 million funding from Archangel and the Scottish Investment Bank’s Venture Fund. The effect the powered prosthetic digits of the i-limb have on amputee’s lives was reinforced by video footage - as Ian simply put it “we all deserve to feel good about ourselves”.

A recurring phrase throughout the evening was “clever inventions are always obvious just after they have been invented”. Anderson, Browning and Gow were all present and appreciated by the audience as much as Stevens. It's clear that Ian does see himself as a businessman who has been lucky to work with such great inventors, but of course he must take credit personally for bringing the devices to market. Scotland has always been viewed as a hub of creativity when it comes to IP, but on occasion it has been less successful at the commercialisation of innovation. Although the products of all three companies were developed in Scotland, commercialisation in the US was a significant factor in each of their successes, given the nature of the businesses.

Bringing Touch to a wider market is now Ian’s goal. The Touch Bionics i-limb featuring in the Will. I. am/Britney Spears video will have done no harm to that ambition!