The Supreme Court, Quadrathlons and Awards – a busy year for Dispute Resolution!

It’s been a busy old year for the Dispute Resolution Team at MBM. As 2015 dawned, we were waiting nervously for the outcome of our Supreme Court case, which had been heard in London in November. We have been fighting for Mr Carlyle, a property developer, for 7 years, in his on-going dispute with RBS, and were thrilled to learn in March that we had won a comprehensive victory with all 5 judges finding that the bank had breached its contract with our client. It was a landmark decision because for the first time judges commented that “the prudence which historically has been attributed to Scottish bankers was not always in evidence in commercial and mortgage lending in the years leading up to financial crisis in 2008”.

In the same week that the Carlyle decision was announced, we hosted a charity dinner for 500 Miles, the charity set up by former Edinburgh lawyer Olivia Giles, for amputee victims, at which we were proud to have author Jamie Andrew as our guest speaker. We raised £2500 for Olivia’s charity, and guests said: “I would have to say that out of all the speakers I've heard (which is a lot) Jamie Andrew blew my socks off tonight. A quadruple amputee, he would inspire anyone to appreciate & make the most of your life.  Totally blown away...Take a massive bow for tonight, one of the best dinners I've been to in a long time... thank you so much for inviting me”.

With the onset of spring our attention turned to other matters. We had two very different challenges ahead of us – firstly running a successful inaugural banking conference at the end of April, and secondly preparing for the Kindrochit Quadrathlon we had been foolish enough to enter, which is a gruelling endurance event at Loch Tay in July, involving a 1.4k open water swim, a 15 mile hike over 7 Munros with 8000 feet of ascent, a 15k kayak, and finally a 54k cycle. With all of the team taking part in either an active or a support role, the spring months saw us juggling our desk jobs with training out on the hills, in the lochs and on our bikes. As the July D-day approached, we organised a quiz night, a bake sale and a baby photo competition to help us towards our fundraising target, and were thrilled to smash our target with a total of £1800 raised for MercyCorps.

The event itself was tremendous, exhilarating and exhausting – with 3 of us undertaking 2 of the 4 disciplines each, and our 4th team member performing the most valuable role of all, of getting each of us to the right start point at the right time, and a 5.30am start, we were mostly relieved, but definitely chuffed to bits as well, to finally stagger over the finish line 14 hours after we had started, at 9.30pm. (it was sobering to realise that the winning team had done it in 8 ½ hours!). In our post-race euphoria we seem to have committed to take part in another team triathlon event next year.... 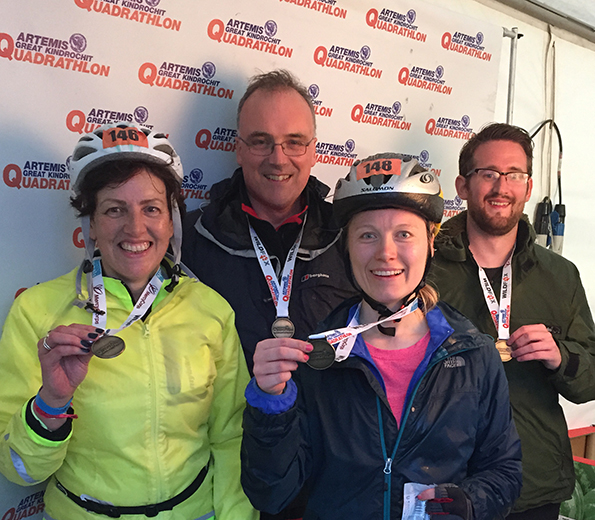 The summer also saw MBM Dispute Resolution pick up 3 nominations in the Law Awards of Scotland 2015, with the winners to be announced at a glittering awards ceremony in Glasgow at the beginning of September. Although disappointed to narrowly lose out in the “Litigation Firm of the Year” category, we were absolutely delighted that Liina Tulk (newly promoted to Senior Solicitor) was awarded “Up and Coming Lawyer of the Year” whilst department head Cat MacLean received the unprecedented honour of being awarded “Solicitor of the Year” for a second time (she is the only person ever to have won this prestigious award twice).

As the summer fades, our thoughts are now turning to the challenges ahead – in November we’re running an innovative ADR workshop, with participation from a cast of highly respected legal personalities including Lord MacLean, author of the Vale of Leven report and one of the 4 Lockerbie judges, Gavin Walker of Axiom Advocates, Brandon Malone of the Scottish Arbitration centre, and Pam Lyall, the leading female mediator in Scotland; we’re also speaking at a financial conference in London before Christmas; in early 2016 we’re hosting another charity dinner for Maggie’s Centre at the Western General; and in April  our banking conference is back by popular demand!