Will Data Analysis Ever Replace The HR Function?

Will Data Analysis Ever Replace The HR Function? 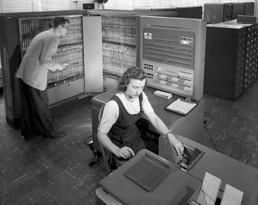 I’ve stumbled across a number of articles recently which have put the traditional HR model under the spotlight. Employees are key to the success of any business and good employers recognise that their happiness in the workplace is of fundamental importance. In the world we now live in, 'Big Data' is becoming an increasingly useful source of information for those in the HR field when developing a happy workforce.

Technology companies, in particular, want the best innovators. This doesn’t necessarily mean the university graduates with the best grades. It means looking further than the ordinary CV or degree results and employers have to think outside the box in their attempts to recruit the best employees. The collection of vast amounts of data is being used to inform all sorts of decisions in HR, with vastly improved results.

One of the most common successful modern companies is Google. However, despite being ranked (currently) as the third most valuable firm in the world, it doesn’t have an HR department nor does it rely on the traditional HR recruitment process. Standard practice is usually for an employer to focus mainly on an interview to get 'a feel' for the right person for the job. But at Google, there has been a sharp shift from opinion-based decision making to ‘People Operations’ – a department based upon data and analytics.

Everyone agrees that businesses should seek to innovate. But this requires the recruitment (and – crucially – retention) of innovators. Google’s view is that almost every HR function runs under outdated traditional 20th century principles  - including risk avoidance, legal compliance and hunch-based people management decisions.

If you’re interested in reading further information about Google in particular, John Sullivan’s article sets out his 'top 10' examples of their data-driven approach.

For example, by adopting the same approach to data that it uses across the rest of its businesses, Google can analyse existing data and predict which applicants had the highest probability of succeeding once they have been hired. Another discovery through analysis has been the fact that holding more than four interviews resulted in very little added benefit when choosing a suitable candidate. This knowledge alone allowed them to shorten their recruitment process (for which, read 'save money').

Google’s People Operations analyse all aspects of the working relationship. Employee surveys are conducted, assessing employee perceptions of managerial performance and views on how to best reward staff. Their advanced employee tracking system seeks to optimize all aspects of an employee's job from the best way to pay bonuses right down to the length of the lunch queue. The data used also allows for the development of predictions relating to employee retention, diversity problems and the most effective approaches for managing employees.

Obviously, the potential of this type of data analysis is much more apparent in big companies. But even without the extensive surveys, Google’s ethos and approach to people management is definitely worth noting for smaller businesses.

In a recent interview with the New York Times, Prasad Setty, Vice President for People Analytics at Google reported that they found that the happiest and most innovative workers were those who were given autonomy and felt a strong sense of mission which was why they extend their search beyond just the best university grades.

Unlike some other areas of the job market, the technology sector is fighting a constant battle with other big players, such as Apple, Microsoft and Facebook for the best talent and so employee satisfaction and retention of the best innovators is clearly key. As a result of the data collected, Google was also able to determine which incentives and benefits would make their employees stay. In addition to the optimum pay scales, bonuses, maternity pay schemes and other benefits which have all been implemented after consideration of what it is the employees will appreciate the most, there are numerous other well-known perks of being a Google employee such as the free gourmet food, games rooms and Wi-Fi enabled shuttle buses.

A similar approach can be seen across numerous other successful companies in the sector and a good example is Edinburgh based Skyscanner. They state on their website that 'there’s no clocking in, there’s no bell at the end of the day. We are accountable for our own performance and deliver our responsibilities to a high standard.' They also provide free food, free Irn Bru and on-site table tennis for their employees. Again, the success of this company speaks for itself.

Yet, as with any innovation, not everyone agrees with this use of data in approaching decisions that were previously the sole remit of HR professionals. Undoubtedly, there are many potential dangers that may arise when data is not so effective. Many smaller organisations will still find the traditional ‘hunch-based’ approach to be more effective and not have access to the levels of data available elsewhere. Employers using the principles of Big Data analysis will need to make sure that a blanket approach is not taken which could conceal any otherwise obvious problems in individual departments.

I do however think it will be interesting to see how the field of HR develops as data increasingly drives decisions in the recruitment, management and retention of employees.

What are your thoughts? Do you think that using a more scientific approach with data analysis can be more effective? Or is it simply the case that nothing can ever replace the ‘gut-feel’ element of the interview process? I’d be fascinated to hear your thoughts – let me know in the comments below.